Netgear Nighthawk X4 and Asus RT-AC87U are two wireless routers that stand in the price range of under two hundred bucks. The price difference between the two has never been anything but very marginal. Hence, it is acceptable if we consider their prices to be more-or-less equal. Both products are coming from the new Wave 2 generation of Wi-Fi routers. As the effect, they feature a similar technology as their base of operation. Is one of them actually better than the other? Let us see. 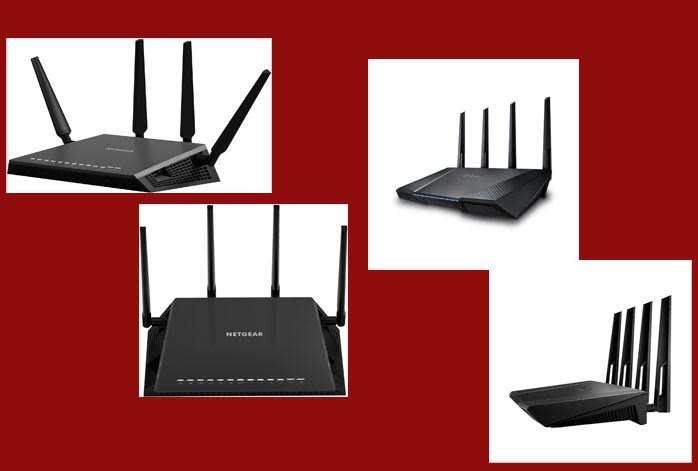 Design
Though they have different curves and shapes, they basically have similar overall dimensions and weights. They both can be placed on a flat surface, like on a table or a shelf, or be mounted on a wall. The indicator lights are placed near the front edge of the routers. They each features four external antennas that are adjustable and detachable. They both have very wide area coverage, suitable for very large homes.

Performance
Both routers rely on the MU-MIMO technology for the quad-stream AC2350 Wi-Fi performance. Unsurprisingly, both routers have similar amounts of bandwidth. Both are dual-band, each with 600 Mbps for the 2.4 GHz and 1733 Mbps for the 5.0 GHz frequencies. In terms of hardware, Netgear Nighthawk X4 indeed comes out as the winner, as it is powered by a 1.4 GHz dual-core processor, as opposed to Asus RT-AC87U’s 1.0 GHz dual-core processor. Each router is furtherly supported with 128MB flash and 256MB RAM. However, the hardware aspect is not very apparent in effect, or perhaps will only be noticeable when handling a large number of simultaneous requests, because Asus RT-AC87U turns out to be slightly faster in actual tests. Of course, Asus routers have always been well-known for excellent speeds due to the sophisticated wireless technology. Both routers come with the beamforming technology.

In terms of wired connectivity, however, Netgear Nighthawk X4 may win slightly over Asus RT-AC87U. The Netgear router offers two USB 3.0 ports, as opposed to the Asus’s one USB 3.0 and one USB 2.0. In addition, the Netgear router also features an eSATA port, which can be handy if you have a device that utilizes the technology.

Other Features
It is worth a note that each router has each own user-interface software and mobile app. Asus RT-AC87U comes with the ASUSWRT, while Netgear Nighthawk X4 relies on the Netgear Genie. However, the ASUSWRT is famous to be one of the very best interfaces that you can find on a router. The UI is neat, intuitive, easy to use, and feature-packed. Netgear Genie also provides an easy setup process, yet is a little bit too complicated down the road.

Damorashop.com is a participant in the Amazon Services LLC Associates Program, an affiliate advertising program designed to provide a means for sites to earn advertising fees by advertising and linking to Damorashop.com (amazon.com, amazonsupply.com, or myhabit.com).
CERTAIN CONTENT THAT APPEARS IN THIS SITE COMES FROM AMAZON SERVICES LLC. THIS CONTENT IS PROVIDED “AS IS” AND IS SUBJECT TO CHANGE OR REMOVAL AT ANY TIME.