Many of us take photo to save and carry around in our smart device, some of them are going to be printed with a printer. Most of us have printer at home but they are inconvenient for traveling and for those who often on trips while also love to take pictures, Canon IVY Vs HP Sprocket are two nice compact printer to carry around. They are small and can print photos nicely but before you shop, see if one of them is actually a better choice. 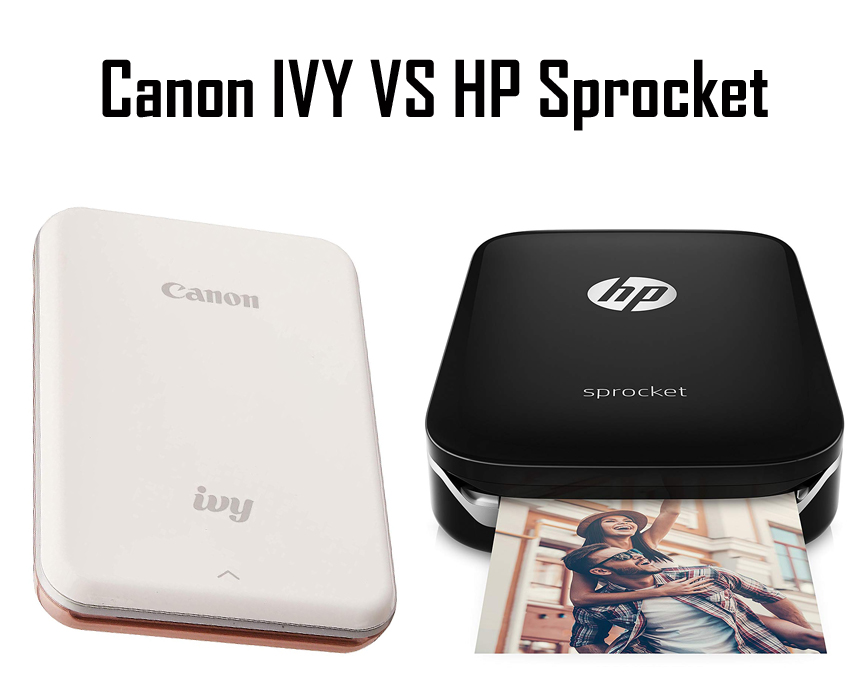 In this article, we are going to give you information about:

Almost everyone loves taking picture today whether it is just a selfies or of a subject in front of them such as the new menu in certain restaurant or the dog we see while taking a short walk in the morning. Life can be full of surprises and we want to memorize them better because apparently our brain can’t remember all of those moments especially for a long time. Thanks to smartphone’s camera, today anyone can take pictures anywhere, anytime, conveniently, as well as sharing their work to other people even across the world.

Besides the convenience of smartphone’s camera, we also have instant camera or Polaroid which is actually a classic tools but somehow re-emerges again in the last decade. They are not as convenient but surely have their own charm when it comes to candid and the “instant-ness” since we can’t redo the shot in case it turns out awkward nor delete the file for it will be instantly printed. They are a great companion when you are with friends or family because it is more fun.

If you are not very fond of the “instant-ness” of Polaroid or instant camera but still want to get the photo comes out right after being taken, a pocket printer may be the good answer. This tool is very popular among travelers or those who loves to spend their leisure time, adventuring or visiting new places because it provides convenient and versatility without being a burden to their luggage. As the name suggest, pocket printer is a printer in the size of pocketable device.

They are very useful if you want to print photo directly without having to wait until home but still want to sort the photo or redo them when they turns out bad. For those who would love to have one, you may want to check these points first:

About Canon IVY and HP Sprocket

If you have decide to get a pocket printer and list down what needs to be offered by the device, now is the time to see what the market has to offer because while there are so many of them out there, only some are going to fits your criteria and it is always best to choose based on what you wished to have in the printer rather than going with the trend. In addition, setting a budget first will help you eliminate those not in the range quickly.

For those who want to keep the printer as affordable as below $100, Canon IVY and HP Sprokcet are two amazing printers to try, not only because they are inexpensive but also because they are able to deliver a pretty nice printing result. Quality wise, they are not going to be as good as our full-size, dedicated photo printer but for a compact size device, they can whipped a well done printed photos to share with friends or to keep in your journal.

Canon and HP are two among the biggest brands when it comes to printing machine and they have this long history in providing customers with reliable performance as well as competitive in price. Their products are available worldwide thus, it is easier to find the accessories in this term suitable cartridges in case you have to make a quick shop while in the middle of travelling. These pocket printers are also coming with their own app to use in your smartphone and already suitable with either Android or iOS users.

Canon IVY and HP Sprocket are very similar to each other despite coming from a different company because they are utilizing the same printing system called Zink which we do like thanks to its convenience but in comparison to other more traditional system, we also not very fond of the printing quality. However, this is not a big deal for a casual users because we do think their image results are still very good and looks nice or especially fun when paired with their editing app.

As you can imagine from a pocket size device, these printers are very small and even smaller than some of our smartphones today, making them ideal for travelling and comfortable to hold for they are not bigger than common power bank. The Sprocket is as small as 3-inch wide, 4.5-inch deep, and 0.9-inch thick while the IVY is measured around 3.2-inch wide, 4.7-inch deep, and 0.7-inch thick. Both of them are made with firm plastic and has this pretty glossy finish on the surface.

They are very light as well probably because the battery being used are similarly 500mAh and rechargeable to full about one and half an hour. The claim about this battery is that they will last for up to 20 photos and 35 photos respectively. There is no ports on the device itself for they only have one USB for recharging the battery and cartridge refilling is via the top surface because we need to open the top case and insert the paper directly.

One of the best things about Canon IVY and HP Sprocket is their printing system which is Zink or Zero ink and this has been used by many companies including these two for the pocket printing solution. As the name suggests, this technology don’t use a physical ink or separate ink cartridge like what’s Kodak used in one of its pocket printer that you can check on our Canon IVY Vs Kodak Mini 2. The ink itself is already combined in the paper and the printer work is activating the color.

This is why the result from both of these printer are the same and Zink paper is also manufactured by the same company or Zink Holdings. What’s unique is these papers also act as sticker and has adhesive backside that you can open to stick them on things. As for printing size, they are in the size of regular business cards (2×3) and already smudge or water proof. Additionally, they are border-free printer thus, it is better to set your photos or emphasized objects in the middle.

Coming to the feature part, this is actually the connectivity part as well because as a printer there is no much of what Canon IVY and HP Sprocket can offer besides printing itself. Both of them are using a wireless Bluetooth connectivity so we can print photos anywhere without having to carry the cable and software are suitable for both smartphone platforms. However, you have to sync or pair the device first before starting to print and try the result.

The last point we want to talk about is their software because this is the most attractive feature we adore from these printers. There are lots of photo editing app in your platform store and they can be fun but Canon IVY and HP Sprocket are offering app with similar capabilities from choosing the frame to adding lots of additional design or stickers on top of your original photo. The apps are easy to use and if you are familiar with any similar editing apps, we can get familiar in no time.

Our favorite feature is in Sprocket which is how the app capture a design like manual drawings on top a paper or surface then transform it into a sticker that we can use to decorate a photo. It may seems not too attractive for some people but we personally love this small function.

Both of them are a great choice for anyone who want to get an instant result of their photos, anywhere but are also similar to each other. They are using the same zero ink system and using the same cartridge made by the same company which makes the cost per print the same as well. They are printing via Bluetooth, have interesting editing app but we do like the one from Sprocket better.

All in all the decision is all yours since none of them are a bad choice thanks to them for using the same system and same technology but if we are to pick one, we do like the Sprocket better just because of the app and prettier device appearance.

Published in Canon and HP

Damorashop.com is a participant in the Amazon Services LLC Associates Program, an affiliate advertising program designed to provide a means for sites to earn advertising fees by advertising and linking to Damorashop.com (amazon.com, amazonsupply.com, or myhabit.com).
CERTAIN CONTENT THAT APPEARS IN THIS SITE COMES FROM AMAZON SERVICES LLC. THIS CONTENT IS PROVIDED “AS IS” AND IS SUBJECT TO CHANGE OR REMOVAL AT ANY TIME.